You could call Syracuse University political science professor Jenn Jackson a “Professor of Woke.” That’s because her bio describes her as “a queer genderflux androgynous Black woman, an abolitionist, a lover of all Black people.” She also holds positions at Syracuse in African American Studies, Women’s and Gender Studies, and LGBT Studies.

And, as such, Jackson used the solemn 20th anniversary of the 9/11 attacks to dunk on America. She started her screed with this tweet: 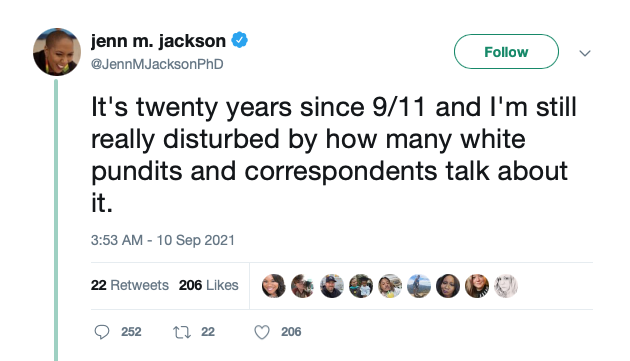 The rest of her tirade went downhill from there. It included anti-American gems like this:

“Plenty of us Americans know what it’s like to experience fear and we knew before 9/11. For a lot of us, we know fear *because* of other Americans.”

So this woman has a highly-paid position at a major university and yet she lives in fear of “other” Americans. Frankly, I think that law-abiding black Americans in some Chicago neighborhoods live in a lot more fear than she does because of rampaging gangs. But what do I know? I’m just a white woman.

Jackson concluded her rant with this:

“We have to be more honest about what 9/11 was and what it wasn’t. It was an attack on the heteropatriarchal capitalistic systems that America relies upon to wrangle other countries into passivity. It was an attack on the systems many white Americans fight to protect.”
“We have to be clear that the same motivations that animated America’s hypervigilance and responsiveness to “terror” after 9/11 are now motivating the carceral state and anti-immigration policy.”

Got that? It was an attack on the “heteropatriarchal capitalistic systems” that Wypipo invented, of course.

Do these loons ever listen to themselves? Heteropatriarchal? What the hell does that mean, other than a mashup of academic code words which translate to complete bullshit.

Of course Professor Jenn Jackson deserved the ridicule and rage that patriotic Americans heaped upon her. For example:

Let me make sure I am getting this correct…

I’m sure the female & LGBTQ execs who died in the Twin Towers would love this hot take.

Osama Bin Laden was a famous opponent of heteropatriarchy. Read more about it in my forthcoming paper "Queering the Destruction of the Kuffar".https://t.co/n76baP4zHp

So the professor did what lots of other radicals do: she locked down her tweets. However, this is the internet, and the internet is forever, so you can read her entire diatribe here.

But Jenn Jackson isn’t the only leftist who blames America for All the Bad Things because racism or war or something. Chris Hedges, a “Pulitzer-Prize Winning Journalist” who formerly worked for the New York Times (wow, shocker!) published his own anti-American agitprop on September 10. Entitled “The Evil We Do Is the Evil We Get,” the article said this, among other Blame America First nuggets:

“We did not, and do not, grasp that we are the mirror image of those we seek to destroy. We too kill with an inchoate fury.”

Yes, sometimes we do. Remember World War II and those Nazis?

And, many years before Hedges and Professor Jackson, we heard This Guy tell us that America asked for it and got cosmic payback on 9/11. Remember Rev. Jeremiah Wright?

But what Jackson, Hedges, and Wright all overlook — intentionally, I suppose — is that most evil today doesn’t emerge from the United States. Or the western world for that matter, nor from despised white people.

One of the roots of modern evil is Communist China, which holds Uyghur Muslim in concentration camps, but also threatens Taiwan and India. It also persecutes Christians, Buddhists, and other religions. Let’s not forget the Covid-19 virus, which originated in Wuhan and about which the CCP conveniently failed to warn the world.

And then there’s radical Islam, which the America-haters also overlook. In fact Islamic terror attacks have been happening worldwide since 1979, and not just against the United States, either. Remember the Beslan School Hostage Crisis in Russia, where hundreds of children died? Or the Mumbai Train Bombings in 2006? And the attack on the Westgate Shopping Mall in Kenya in 2013?

I could go on and on, but there’s not enough room. And while the United States has not been a perfect nation (which country has been?), we are not the source of all that’s bad in the world. But Professor Jenn Jackson so despises the country, which has provided her the means to make a good living, that she used a day in which most of her countrymen mourn to spew her America-hatred. Parents of students who attend Syracuse University — most of whom probably live in New York State, which bore the brunt of the 9/11 attacks — should yank their kids from that school.

The post Professor of Woke Uses 9/11 to Dunk on America appeared first on Victory Girls Blog.