The most famous — some would say ‘infamous’ — statues of Confederate generals came down in Charlottesville, VA, on Saturday. Two of the Confederacy’s most renowned legends, Robert E. Lee and Stonewall Jackson, no longer preside over the parks which once bore their names.

You’ll recall that the statue of Lee was the focus of deadly protests in August, 2017. The Charlottesville City Council had just put forth a proposal to remove the statue of Lee from what was then Lee Park. As a result, white nationalists came to the city in a “Unite the Right” rally to protest. Counterprotestors faced off against them, and clashes broke out. However, the worst came when a nationalist drove his car into a crowd of anti-nationalists, killing a woman named Heather Heyer in the process. The driver, James Fields, is serving a life sentence behind bars for her death. 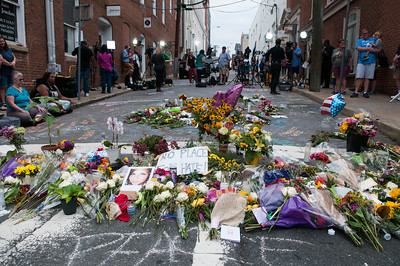 The incident also gave liberals and the media fuel that they eagerly used against President Donald Trump. Shortly after the tragedy in Charlottesville, Trump held a press conference in which the media peppered him with questions about the protests. It was then that Trump said “you also had people that were very fine people, on both sides,” which Democrats and the media used to label Trump as a racist. In context, however, Trump had been speaking of people who rallied both for and against the Lee statue:

Now, four years later, both the statues of Lee and Jackson are gone. Of course many people were thrilled.

Like Mike Signer, Democrat attorney and former mayor of Charlottesville at the time of the rally. Signer somehow connected the events of 2017 with the January 6 Capitol riots:

“In so many ways, Charlottesville was a microcosm for what’s happened in the country: the advent of flagrant, open, violent white nationalism in public streets. The ‘Unite the Right’ rally was clearly a prologue for the insurrection on Jan. 6.”

Could someone please alert me to all the incidents of “open, violent white nationalism in public streets” that are occurring? I remember a lot of violence in the streets last summer — in Minneapolis, Portland, Seattle, Chicago — but I don’t recall a lot of white nationalists causing mayhem.

Then there’s Zyahna Bryant, a University of Virginia student. When she was a ninth-grader, she ignited the entire controversy by circulating a petition in March, 2016, to remove the Lee statue. She wrote in her petition:

“My peers and I feel strongly about the removal of the statue because it makes us feel uncomfortable and it is very offensive.”

And on Saturday, before both statues came down, she said:

“It feels good. It’s been a long time coming.”

“The statues coming down is the tip of the iceberg. There are larger systems that need to be dismantled. Educational equity is a good place to start.”

Because, of course, it’s not really about the statues. It never ends with the statues, either, nor does such havoc stop at our borders. In Canada, hundreds of unmarked graves of indigenous people were found on the sites of residential schools in three provinces — schools that over 100 years ago forced Indian children to assimilate. Churches often ran these schools. And now — no doubt inspired by their counterparts in the US — Canadian activists have burned down several churches. The head of the British Columbia Civil Liberties Association tweeted simply:

These four words inspire the actions of Marxist progressives — burn it all down. Destroy statues and monuments which represent the heroes of the past. They are now unacceptable since those people didn’t live up to an impossible code. Destroy Christian churches, because Christianity is an impediment to dreams of a libertine utopia. And rewrite the history that children learn in school. Instead, fill their minds with anti-American propaganda. As Vladimir Lenin wrote: Give me four years to teach the children and the seed I have sown will never be uprooted.

But if the statues come down and the churches burn, what will that accomplish? Will that stop murder in cities like Chicago, where 2021 homicides will soon surpass the carnage of 2020?

No, because such demolition is not about improving lives. Rather it’s about annihilating the traditions of Western culture, and especially the United States.

One of my favorite films is the 1965 classic Dr. Zhivago. In the movie, Zhivago and his family flee Moscow to a country home in the Ural Mountains to escape the chaos of the Russian Revolution. In one scene, Zhivago’s father-in-law Gromeko opens the newspaper to find that the Bolsheviks have assassinated Czar Nicholas II and his entire family:

Gromeko: They’ve shot the Czar. And all his family. Oh, that’s a savage deed. What’s it for?

Zhivago: It’s to show there’s no going back.

Likewise progressives tear down statues and burn churches to show that there’s no going back for them, either. They won’t rest until the traditions of Western culture are obliterated. Zyahna Bryant was correct: tearing down the statues of Lee and Jackson are indeed just the tip of the iceberg.